The rumen is the first stop for the feed the cow consumes. This compartment is the largest of the four compartments and can hold around 25 gallons of content, depending on the size of the cow. The rumen acts as a storage and fermentation compartment. While the food sits in the rumen, microbes break down the feed and make volatile fatty acids (VFA), which the rumen then absorbs most of while sending the rest of the feed into the second compartment.

The omasum is the third stop for feed products. The omasum can only hold about 2 gallons, and it is made of leaf-like tissue (similar to pages in a book). In this stage, the Omasum absorbs water for the cow and acts as a filter that only allows small particles of food and some liquids to move onto the fourth compartment.

The fourth and final compartment of the cow’s stomach is the abomasum. This is often referred to as the “true stomach.” It can hold about 7 gallons. This compartment functions much like a human stomach. This is where stomach acids and enzymes work to breakdown the feed before it moves into the small intestine. 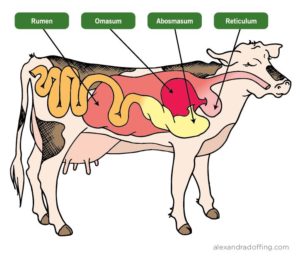 Because cows eat grass and other roughage, the one-compartment stomach just doesn’t cut it. These kinds of feed are difficult to digest, so the four different compartments help the cow to break it down, get the most nutrients possible, and pass the waste easily.